We’re committed to the safety and well-being of our community and employees. As we continue to learn more about COVID-19 and work with local partners, your restaurant may be impacted by a closure or changing hours. Please call ahead to confirm. For more information, click on this link. 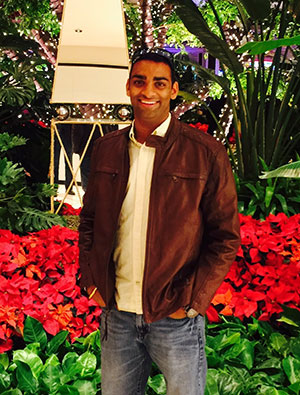 Shameet Desai was looking forward to graduating from the University of Houston’s C.T. Bauer College of Business with his finance degree in May 2016. It never occurred to him that he would make his entrepreneurship dream a reality before he donned his cap and gown. “A month after we signed the agreement with Huddle House, I graduated,” Desai says. “ I knew I would go into business; I never knew I would go into business right away!”

Desai, who along with his aunt and uncle, Sameera Gujarathi and Ravin Talati, signed an agreement to build three locations over the next three years, is excited about the opportunity to apply his business theories to real-world practices. As he prepares for a two-month hands-on training stint prior to opening their first location in Gainesville, Georgia, in early 2017, Desai shared what it was like to join the Huddle House franchise family.

How did you find out about Huddle House?

Last December, I was visiting with my uncle in Atlanta. We were talking and he asked, “Have you been applying for jobs? Do you know what you want to do?” I said yes, that I wanted to be an owner of some type of business; I didn’t know what. He said he did, too. He started to do some research and came across Huddle House. He emailed corporate to get some information, and since he was in Atlanta already he started communicating with them.

In April my family and I drove from Houston to Atlanta and did a full Discovery Day. That same day, I decided this is what I wanted to do. I signed the agreement that day.

Did you have any foodservice experience in your family?

My grandfather used to own package stores and hospitality venues. My parents are both in the medical field, and my uncle is as well. As for my experience, I’ve never worked in restaurants. I worked a few years in retail for Banana Republic. I worked for an Indian radio station in Houston, doing their finances and marketing. And for one summer I came to Atlanta as an intern for Earthlink.

What was it that made you certain Huddle House was the right investment for you?

One of the biggest things was the corporate office in Atlanta. They were so willing to help us out when we needed them. They said if I ever needed anything, they would come out to our first location to help me out.

Where are you opening your franchises?

Our first location is under construction in Gainesville. Once that opens, we’ll open in the Braselton, Georgia, area and open our third in Athens, Georgia.

How will you divide up the duties?

I will be coming in as the supervising owner. Once the first restaurant opens, I will be the general manager there.

Did you grow up with Huddle House?

Honestly, I had not heard of it. My uncle knew about it, where he works there’s one pretty close to there. In Houston our closest location is about an hour away. My first visit to a Huddle House was the day we signed the franchise agreement. So I had never even tried the food before I signed on.

What did you have?

I had the omelet. I liked it, and I liked the layout and how the whole Huddle House setup is. I liked how the kitchen is open to the restaurant. The guests can watch them while they’re cooking the food and talk to the chefs. I am really big on customer relations, so that was a big deal to me. With the kitchen right there in the open, the opportunity for customers to talk to chefs and employees is really big.

Cheesy Bacon Tots were a pretty good intro to the menu for new franchisee Shameet Desai.

I also tried the tater tots smothered with cheese, sour cream and bacon bits. I have some other family members that live in Atlanta, and now they’ve gone and tried out Huddle House, too. There are quite a few of them in the Atlanta area.

What was it about franchising that appealed to you versus starting your own business from scratch?

We had a small discussion about that. I pretty much have no proper business knowledge, and other than my grandfather, business ownership in our family has been minimal. When we go into a franchise, however, we have the support we need when we need it, which we wouldn’t necessarily have in an independent business. For myself especially, I wanted to make sure I had the support and knowledge I needed to make my business a success.

My uncle, Ravin Talati, is a family practitioner who owns his own medical practice. He’s obviously very busy with his work, but whenever he has the time and the opportunity, he will help out when he can, and however he can. He’s going to make sure he knows how to take care of everything. My aunt, Sameera Gujarathi, will be more involved. She helps out my uncle in his office a couple times a week, takes classes and takes care of their kids. She has more time to help me out. And I’ll be living with my uncle and aunt at first because they know it will be stressful for me, opening a new business, and having family around will help.

What are your plans for growth in the future? Do you know yet whether you want to grow beyond the three locations you’re planning now?

We do know we want to continue to expand beyond three in three years. We don’t have timeframe set yet, but we do plan to have more than three.

Do you have any tips or advice for someone considering investing in Huddle House?

If you’ve never been to a restaurant franchise before and you’re building from scratch, just be aware it’s a very long process; it takes time. Don’t get frustrated and rush. You want to be sure you find the perfect location. For your first location, especially, you want to be sure it’s off the charts. You make sure you call corporate out on your site selection process. They know what their best stores look like, and they can compare those to the site you’re considering. It’s a process — construction, architecture, kitchen, plumbing — and it takes patience. You don’t want to rush and have mistakes.

Looks like we need to find you a store

Search for locations near you.